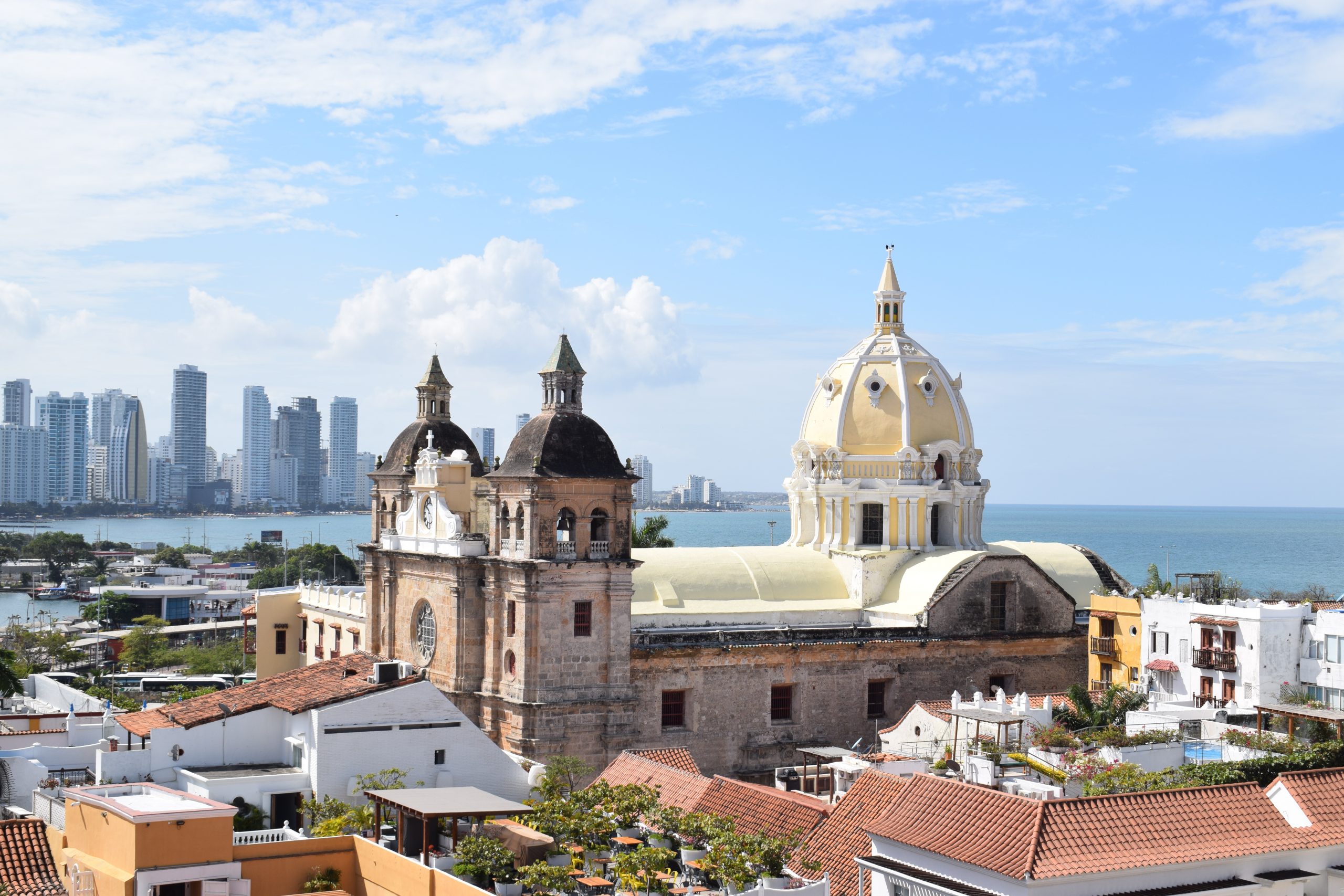 This is the first chapter of Ongresso‘s Colombia Market Entry Guide 2020, we present an overview of what you should know and/or be aware of when expanding your business to Colombia. More information about the region and services offered can be found on the Ongresso website. To stay informed about regional news and international business updates in Latin America, follow Ongresso on social media.

*Note: The coronavirus pandemic will have unknown effects on the entire world economy. Some information presented in the report may need to be revised as circumstances evolve and the economic forecast regains stability.

Colombia has grown into one of the leading economic powers in the region over the past 10 years, overtaking countries such as Chile, Argentina, and Brazil in annual percentage GDP growth. Despite the continent’s many political challenges, Colombia is now a major destination for many international companies and investors. And rightly so, because with Medellin (named the world’s most innovative city in 2013 by the Wall Street Journal) and Bogota (Latin America’s second fastest growing mega city), Colombia provides an attractive market for international expansion. The country’s undisputed strengths include its geographical location, abundance of natural resources, and an innovative business environment that has been fostered by the local government and flourished thanks to its talented and well-educated workforce.

Colombia’s geographical location is a major advantage that heavily contributes to the country’s commercial success. Bordering two oceans and serving as a link between Central and South America as well as the Caribbean, Colombia is regarded internationally as an important strategic trading partner. This is made evident by the number of established free trade agreements in the region and throughout the world, including strong trade partnerships with  the USA and EU. Trade volumes with the world power China, Colombia’s second largest trading partner since 2018, is also growing steadily. A bilateral free trade agreement is only a matter of time.

The enormous wealth of natural resources account for the majority of Colombia’s exports. High temperatures and frequent rainfalls shape the third largest country of Latin America as an agricultural utopia with extreme biodiversity. It is 1 of only 17 countries in the world that boasts the label “megadiverse” and is ranked 2nd on the list, only behind Brazil. Agriculture and commodities drive most of the national industries. Some of the top export items from Colombia include coal, petroleum, coffee, flowers, bananas, and gold.

Colombia is the fastest growing country in Latin America, due, in part, to its emphasis on innovation and promotion of early-stage entrepreneurship. One result of Colombia’s domestic investment strategy is the education and promotion of its human capital. By equipping the eager generation of youth with accessible, quality education and technological expertise, Colombia has developed a reputation as the region’s tech leader. At the World Economic Forum in Davos in 2019, the city of Medellin was named 1 of 8 global centers for the 4th Industrial Revolution and is being dubbed by some as the “Silicon Valley of Latin America.” Home-grown unicorn Rappi, the booming adoption of mobile technology, and the rapid shift towards clean energy and transportation are all factors that have helped the country earn its reputation. 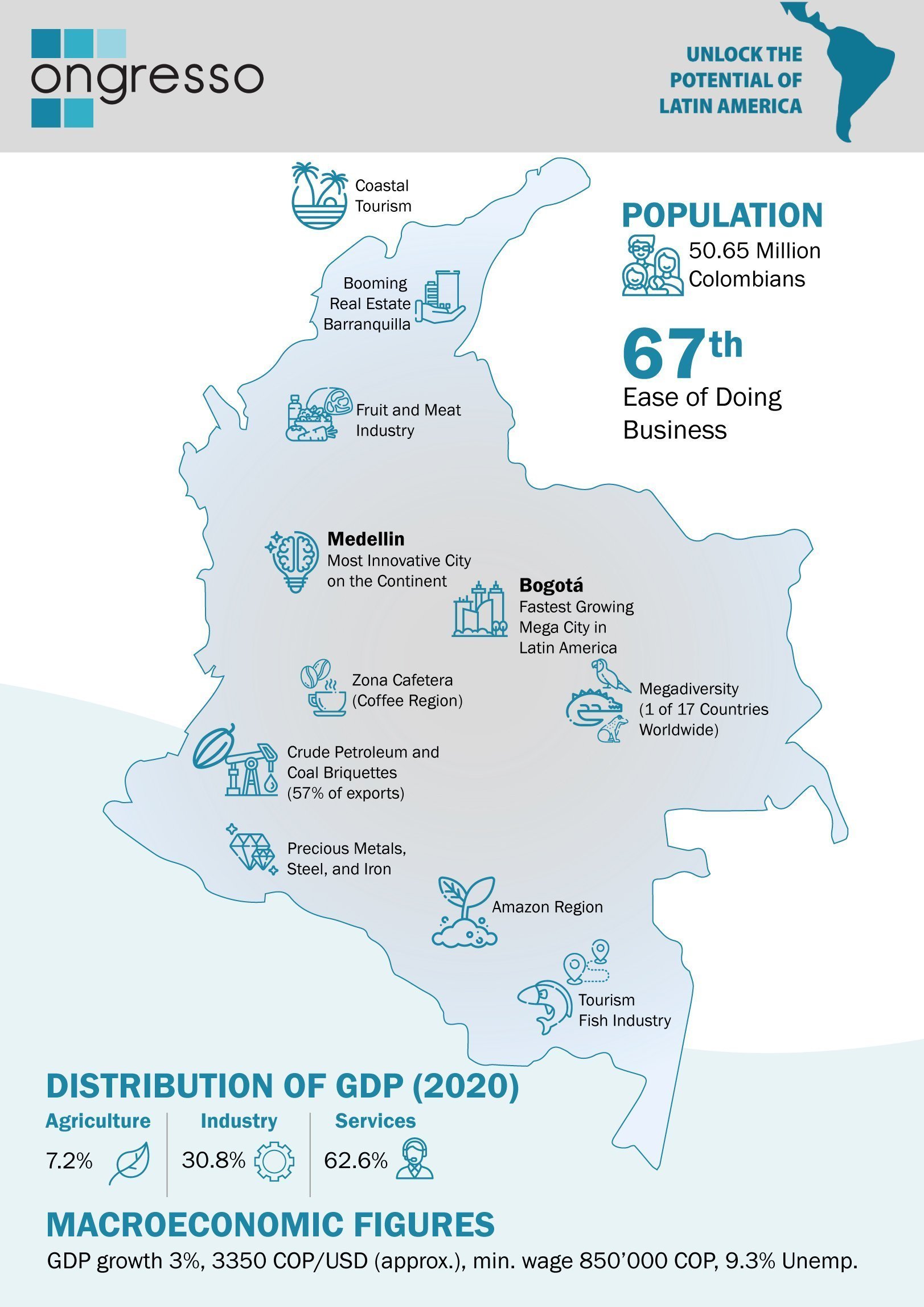 In the rest of the Colombia Market Entry Guide 2020, you’ll learn:

Contact us to set up a free consultation to talk about how we can help you succeed in Latin America.