5 Reasons why to Invest in Colombia – The Economy 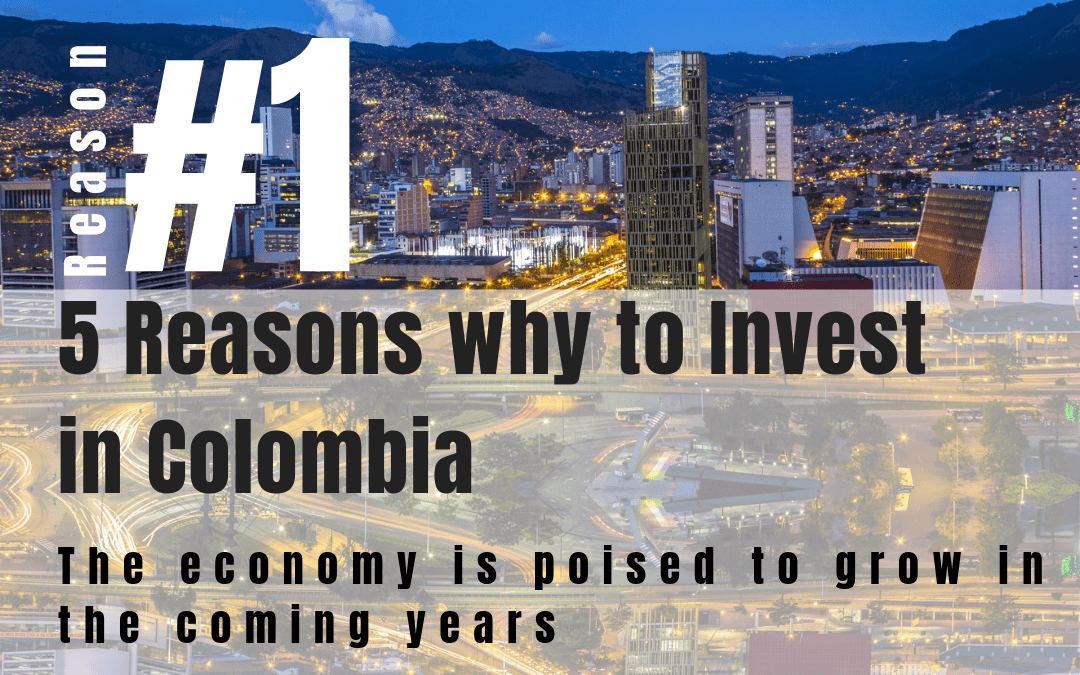 The economy is poised to grow in the coming years

Colombia is one of the most stable economies in Latin America with a solid path of growth. It tops the list of “30 countries preferred for investment by foreigners” published by the United Nations Conference on Trade and Development (UNCTAD). The country relies on its rich natural resources, with oil production and mining building the backbone of the economy. Other important sectors are the agriculture, industrial and tertiary sectors. The oil production capacity of the country slightly shrank during 2018 due to a decreased price of oil in the global market. This led to a reduced pace in the country’s economic output. Economic growth is expected to pick up again in 2019 and 2020, supported by stronger private consumption, a gradual recovery of non-oil exports, higher oil prices and an increase in foreign direct investment.

Today Colombia is one of the biggest economies in Latin America (ranked 3rd) and expected to be the 2nd fastest growing by 2020, according to FocusEconomics.

Colombia’s current government is planning to foster economic growth by further international cooperation in areas such as trade, education, innovation, and technology, reducing the tax burden for businesses and simplifying administrative processes. The tax reform that is currently being discussed by lawmakers aims to reduce the public deficit which had increased in 2017. The peace agreement that was signed between the government and the FARC guerilla in 2017 and the resulting increased security in many of the country’s remote areas should continue to attract investment in the agricultural sector. Colombia’s balance of trade increased significantly over the last years as the country signed free trade agreements with the US, the EU, and various other countries. The economy grew by approximately 2.8% in 2018, helped by solid private consumption. Exports grew by 15.8%, with a further increase expected in 2019.

Colombia offers attractive conditions for foreign companies in order to maintain the positive economic upswing. One example is Sana Commerce, a Dutch e-commerce software company that opened its first Latin American office in Colombia in 2018. Cas Nieskens, Manager of Sana Commerce in Colombia explains why the company chose Colombia:

“The city of Medellin was chosen for its emphasis on IT education and engineering, its context of entrepreneurship and entrepreneurial spirit, as well as its government and favorable business environment”.

Before expanding your business to a new country, you should be aware of its unique local customs and culture. Colombia is no exception. It is a vast country with a lot of cultural diversity where the business etiquette varies as we travel from one part of the country to another. In most of the big cities of Colombia, business is done more formally than in smaller cities or in the coastal regions. However, as in most countries in Latin America, business success relies a lot on personal relationships that build trust and provide a certain compensation for a weak legal system. Using the support of a reliable local partner can help you save time, resources, and ensure your compliance.

If you require more information on how to expand your business to Colombia, contact Daniel Breitenmoser at contact@ongresso.com.